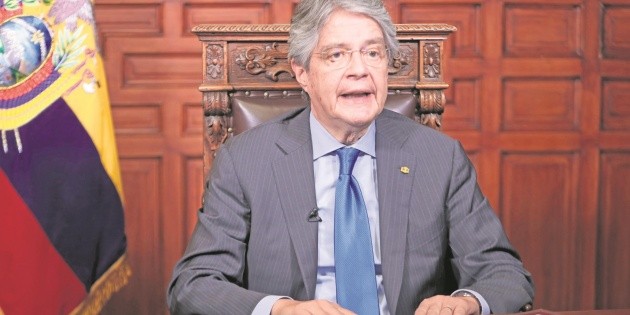 The president of Ecuador, Guillermo Lasso, announced yesterday that he decreed a state of exception for the entire country before a increased rates of violence due to drug trafficking, ordering the mobilization in the streets of police and military.

“Starting immediately, our Armed Forces and police will feel strongly in the streets because we are decreeing a state of exception throughout the national territory,” said the president in an address broadcast by the state channel EcuadorTV.

In the streets of Ecuador there is only one enemy: drug trafficking. In recent years, Ecuador has gone from being a drug trafficking country to one that also consumes
Guillermo Lasso, President

The right-wing ruler he also decided on Monday to change his defense minister amid a prison crisis and a “stage of insecurity” in the nation, all due to drug trafficking. Between January and August of this year, 1,427 murders were registered in the country, 55 more than in all of 2020, according to the Government Ministry.

Two weeks ago, members of criminal groups linked to cartels in Mexico and Colombia who are imprisoned and vying for power clashed in a Guayaquil penitentiary, leaving 119 inmates dead in what constitutes one of the worst prison massacres in the history of America. Latin.