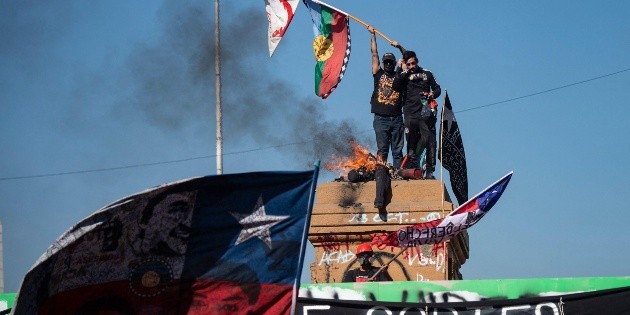 There are two deaths, 56 injured and 450 detainees during the violent riots that occurred on Monday in parallel to peaceful demonstrations called for the commemoration of the two years of the social revolt in ChileChilean police reported Tuesday.

A man was killed by gunshot wounds during an attempted robbery in a business premises, while the second fatality was a woman who died after falling from a motorcycle, both in Santiago.

The Chilean capital concentrated most of the disturbances registered at the national level with barricades, attacks on a police station and looting of shops and public offices, according to a police report.

Authorities arrested 450 people across the country, 279 of them in Santiago, while 11 civilians and 45 policemen were injured.

“The figures are soaring“said Marcelo Araya, director of Order and Security of the Carabineros de Chile.

More than 50 demonstrations were convened nationwide to commemorate the two years of the social outbreak of October 18, 2019 in Chile, triggered by a student protest over the rise in the price of the Santiago Metro ticket, and which led to massive demonstrations in those whose participants asked for a greater social justice.

The protests during the spring of 2019 left 34 dead and more than 400 eye injuries during the more than four months that they lasted, until the outbreak of the pandemic in March 2020.

The undersecretary of the Interior, Juan Francisco Galli, attributed the violent excesses of Monday to the opposition candidates for the presidential elections of November 21, the leftist Gabriel Boric and the centrist Yasna Provoste, for supporting and proposing pardons to protesters who are imprisoned and who “looted, destroyed everything and threw Molotov cocktails” during the Chilean revolt two years ago, he said.

“Those ultimately responsible for this violence are those who installed in our country a sense of impunity, that there were no consequences for committing acts of violence,” Galli added.

The violent riots contrasted with the more than 10,000 people who gathered in Plaza Italia – baptized during the revolt as Plaza Dignidad – to demonstrate peacefully, and “those who had a fairly positive behavior,” said Araya.

The demonstration in Plaza Italia lasted almost four hours, without major incidents and with little presence of special police forces.

The commemoration took place on the same day that the Constituent Convention, born out of the clamor of social revolt, began to address the substantive issues that will be incorporated into the articles of the new Magna Carta after 100 days dedicated to setting its internal regulations.