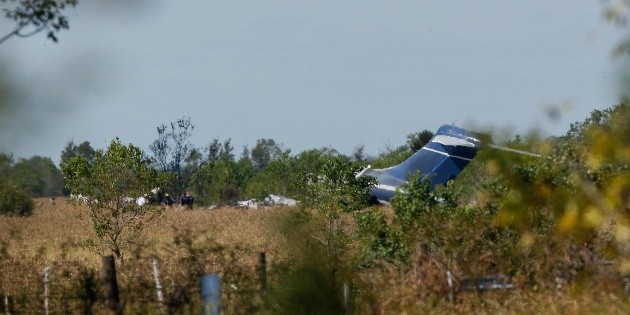 A plane with 21 people on board crashed Tuesday while taking off near Houston, Texas, and all passengers and crew managed to exit the aircraft before it caught fire, firefighters and other local authorities reported.

“Fortunately all 21 passengers were reported as evacuated from this twin-engine just before it was engulfed in flames.”

Television images showed firefighters spraying water on the burning wreckage of the plane, who crossed a fence and stopped on a country road surrounded by trees and shrubs.

The fuselage was reduced to ashes and only the tail section remained whole., as black smoke rose from the wreckage.

The plane, a twin-engine McDonnell Douglas, was almost completely destroyed by flames, according to images released by emergency services. But there is only one reported casualty, said the Katy Fire Department, west of Houston.

⚠️#URGENT: Airplane crash reported near Houston Executive Airport in Houston, Texas#Houston l #TX
A small jet has been involved in a serious crashed just north of the regional airport. No structures are believed to have been impacted.
Working to verify further details! pic.twitter.com/yP4VoysQQB


“Fortunately the 21 passengers, including the three crew members, were reported as evacuated from this twin-engine just before it was engulfed by the flames,” firefighters said.

Local reports noted that the aircraft was carrying a group of baseball fans who would attend the playoffs between the Houston Astros and the Boston Red Sox on Tuesday night.

Houston’s KHOU News reported that the plane’s owner, James Alan Kent, was on board.

Tim Gibson, director of Waller Harris County Emergency Services, said passengers and crew “They were stunned, very, very stunned, but they evacuated on their own.”

“We always hope for the worst, but we long for the best; today we obtained in an absolutely positive way the best result that we can hope for in this incident,” Gibson acknowledged at a press conference.

He confirmed that fire crews had extinguished the fire “after a substantial effort” to control the burning of fuel.

Authorities said one of the passengers was a 10-year-old boy and that two people were taken in for treatment for minor injuries such as back pain after the accident.