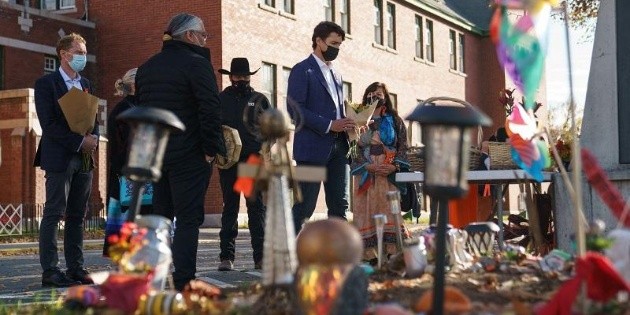 Canadian Prime Minister Justin Trudeau visited the indigenous community of Kamloops on Monday, where the remains of 215 children from a former boarding school were found in May, and apologized for not having gone earlier.

The visit came after strong criticism of Trudeau for ignoring a previous invitation from the community on the first National Truth and Reconciliation Day, Sept. 30, when he went on a family vacation.

“Instead of talking about the truth and reconciliation, (everyone) has talked about me and it is my fault. I take responsibility for that,” he acknowledged at a press conference.

Sitting next to him, the head of Tk’emlups te Secwepemc, Rosanne Casimir, said: “It was a long awaited moment, to receive first-hand recognition and sympathy about this horrible confirmation of graves from the Canadian head of state.”

He recalled that his community felt “shock, anger, pain and disbelief” at Trudeau’s snub on September 30, but added that he “takes some positive steps forward and to rectify a mistake.”

Trudeau has made reparation for Canada’s more than 600 indigenous tribes a priority of his administration, and named a national day of reconciliation to honor the victims of internees who suffered a failed policy of forced assimilation of the Indigenous villages.

Since the first discoveries in Kamloops five months ago, more than 1,200 unidentified indigenous tombs have been found at other former internment sites, and additional searches have been launched across Canada.