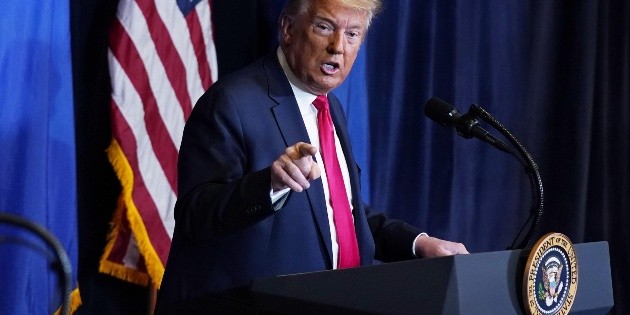 Former US President Donald Trump testified Monday in a lawsuit brought by activists who allege having been attacked by your security guards six years ago, reported an attorney for the plaintiffs.

“Donald John Trump sat for approximately four and a half hours under oath and answered questions about the events that occurred outside Trump Tower on September 3, 2015,” said attorney Benjamin Dictor.

Several activists of Mexican descent filed the lawsuit alleging that the Trump’s bodyguards violently disbanded their protest in front of the Trump Tower in New York.

The protesters were protesting the disparaging remarks Trump made about Mexico and Mexicans at the beginning of his ultimately successful run for the presidency.

The plaintiffs allege that the guards ripped off their posters and they beat and strangled one of the protesters.

Trump made the videotaped statement inside Trump Tower, after a New York judge rejected an attempt to vacate a subpoena ordering him to testify.

“While we will not comment on the substance of Mr. Trump’s testimony at this time, we hope that today’s events serve as an example that our institutions have prevailed and no one is above the law“Dictor expressed.

In a statement, Trump agreed to have told his version of what he called a “ridiculous story.”

“When security tried to reduce the situation, unfortunately they were met with ridicule and violence by the plaintiffs themselves,” Trump said of his bodyguards.

“The court dismissed almost all of the plaintiffs’ claims, except for an unfounded claim for injuries they never sustained, and the temporary loss of a worthless cardboard sign that was returned shortly thereafter.”

The case is one of several civil lawsuits Trump faces.