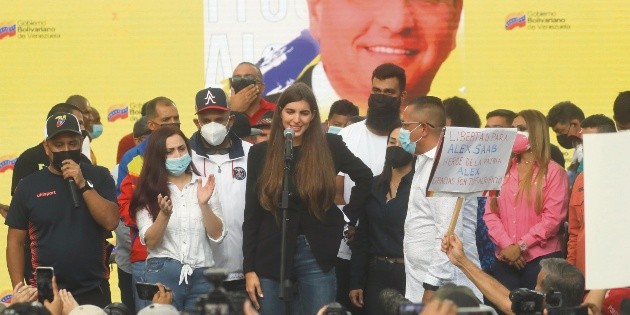 Colombian businessman Alex Saab, close to President Nicolás Maduro and extradited to the United States on Saturday accused of laundering, He affirmed that he will face the process with “dignity”, assuring that he has “nothing to collaborate” with that country, according to a letter read yesterday by his wife.

“I will face the trial with total dignity (…). I want to make it clear that I have nothing to collaborate with the United States, I have not committed any crime, “said Camilla Fabri, Saab’s wife, reading the document at a rally organized by the Venezuelan authorities in support of Saab, in the center of Caracas, which was attended by about 300 people.

Designated as a front man for Maduro, Saab will appear today before a Florida court, the United States Department of Justice reported in a statement.

The 49-year-old businessman and his partner Álvaro Pulido, whose whereabouts are unknown, are accused in the United States of running a vast network that exploited a food subsidy system in Venezuela.

According to Washington, transferred some 350 million dollars outside of Venezuela to accounts they controlled in the United States and other countries. They risk being sentenced to 20 years in prison.

“I will face the trial with total dignity. I want to make it clear that I have nothing to collaborate with the US, I have not committed any crime.”