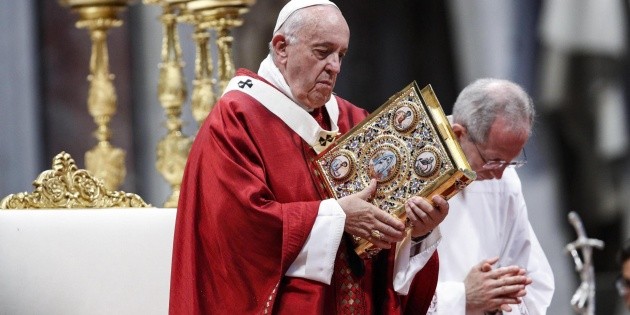 Pope Francis advocated this Saturday for “a universal salary, so that each person in this world can access the most elementary goods of life “and therefore “the reduction of the working day”, as a measure for greater access to work for all.

“This system, with its relentless logic of profit, is escaping all human domain. It’s time to slow down the locomotive, a runaway locomotive that is leading us into the abyss. We are still on time”, assured the Pontiff, in a message on the occasion of the IV World Meeting of Popular Movements.

In it he stressed the need to change the current socio-economic system and asked governments, politicians, companies and religious leaders to help in this goal, while demanded “the release of patents” on vaccines, the cancellation of the debt of poor countries and an end to the destruction of “forests, wetlands and mountains”, by large extractive corporations; of the contamination of rivers and seas, and of the poisoning “of towns and foods”.

He also requested that powerful countries stop the aggressions: “No to neocolonialism”, he said, adding that the UN should be the body to resolve conflicts because “We have already seen how unilateral interventions, invasions and occupations end, even if they are carried out under the noblest motives or clothing.”

He asked governments and politicians to “work for the common good”, be careful to “listen only to the economic elites” and “be servants of the peoples who cry out for land, shelter, work and a good life” and to the religious leaders who “Let us never use the name of God to foment wars or coups.”

He also referred to “Protests over George Floyd’s death”. “It is clear that this type of reaction against social, racial or sexist injustice can be manipulated or orchestrated” but “that movement did not pass by when it saw the wound of human dignity struck by such an abuse of power.”

He mentioned “concrete measures that may allow some significant changes”, such as “urban integration, family farming, the popular economy. To these, which still require us to continue working together to make them concrete, I would like to add two more: the universal salary and the reduction of the working day. “

He also claimed “a basic income (the IBU) or universal salary, for that each person in this world can access the most elementary goods of life “, as well as a serious analysis of the reduction of working hours as a redistributive element of the workload among the population.